When people find out that I’m a plant-based vegetarian, one of the most common questions I get is ‘Isn’t is difficult?’. My answer generally is ‘no’. I know what I can and can’t eat (I also have allergies to things like caffeine and gluten), and I’m educated about food and how to find/prepare it.

Travelling, however, can throw a few obstacles in my path. At home, it’s easy to prepare food and plan ahead. When you’re on the road, you have to think a bit more about where your next meal is coming from. It’s far from impossible, though. OK, you don’t always have much choice in what you eat and you may sometimes end up with something you wouldn’t normally choose (fries, for example), but I can always find something plant-based. Due to flight problems, I found myself eating brunch/lunch (I’d lost track of time by this point) at Vienna airport. As Heathrow airport had decided to open their food outlets only 30 minutes before the first flights took off (helpful, thanks Heathrow), I hadn’t had time to grab anything at London so I was really hungry. I also had a 6 euro voucher that the airline had given me to apologise for my delay at Vienna. 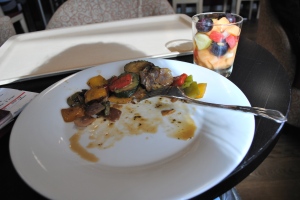 As I have a gluten allergy, most breakfast foods are out of the question. What I love about Austrian and German breakfasts is that they always have a random vegetable dish on offer. I’ve never worked out what they eat it with or how it goes with the regular eggs, toast, porridge, fruit etc, but it certainly comes in handy when you’re plant-based. Some potatoes would have been nice to go with it, but you can’t be picky. I opted for a pot of fruit instead, and washed it all down with a decaff soya latte. I find that most coffee shops, wherever you are in the world, will serve decaff coffee and a lot also stock soya milk now, so it’s worth asking. Unlike in the UK, they don’t always advertise the fact. It’s like drinking decaff coffee is some secret, socially unacceptable habit that can only be traded under-the-counter. 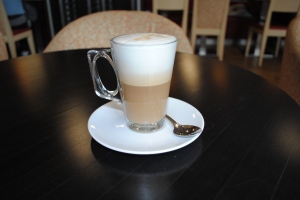 Not made #vegan #glutenfree pancakes in so long. First attempt at chocolate flavour today, let's see how they taste 😍
Also got to walk down into a natural #cave under a #castle today. There's a water spring down there! I had no idea stuff like this existed in #wales. Got to be honest, was more than slightly concerned there might actually be a #dragon down there 😕
Do all Welsh castles look this spooky in the fog?
#llynyfanfach
Got my @ripple_living pasta to keep me going on my camping weekend 👍
%d bloggers like this: