The weather here in Cardiff has been hit and miss over the weekend. Saturday morning looked bright and promising, so I walked down to the real food market to do my shopping. As I was deciding which veggies to eat this week, the heavens opened and it poured down. Drenched through, I finished my shopping as quickly as possible and ran home, only for the sun to come out as soon as I got through the front door!

My seven year-old godson had asked me to take him ice-skating, which was originally planned for Saturday afternoon, but after another couple of rain showers and a check of the weather forecast, I decided that activity would be best left until Sunday morning. According to the forecast, double checked by my godson on his games console, there was due to be a gap in the clouds from 11am Sunday that would do us fine.

Ice-skating is far from a new activity for me. Having grown up in Blackpool, where the only affordable place to hang out on the weekend was the ice-rink, I’m quite comfortable skating round in hired skates. My godson, however, has not skated so much. I first took him when he was three and he was still small enough to carry around the ice if needs be. On that first outing he’d loved it, laughing his socks off as he slipped and slid like Bambi. The following winter, unfortunately, was not so successful. Suddenly big enough to be aware of the danger involved, he only managed half a circuit before one of the marshalls had to carry him off. So I was more than a little surprised when he asked me to take him this year. And I have to say how incredibly proud I am of him for being determined to give it another go. He’s still no figure skater, but he completed a good few circuits on his own and was quite happy to pull himself back up after every fall. I did have to laugh at his choice of gloves, though. He’d picked up two left-hand, adult-sized gloves that flapped comically as he tried to stay upright:) 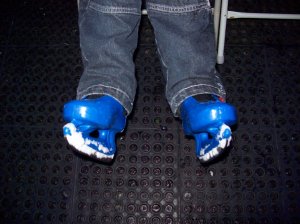 My hope is that some of you are inspired to try a new activity in the New Year. And if you find it a little difficult at first, then take my godson’s advice and keep trying.